AN OBSCENITY 'BUST' AT MOE'S

The crackdown on the popular used bookstore at 2476 Telegraph Avenue came a day after a plainclothes cop, Franz Schwarm, bought a copy of "Snatch" comics and showed it to his fellow officers.

Police raided Moe's Books, located in the heart of Berkeley's hippieland, and confiscated the following:

47 copies of a magazine with an off-color title
74 copies of "Zap Comics No. 2"
One copy of the "Scum Manifesto"
Several copies of "Mah Fellow Americans," a collection of anti-Administration cartoons by Ron Cobb
$500 Bail

The balding bookseller, who was released on $500 bail said both "Zap" and "Snatch" comics are the works of a San Francisco artist, Robert Crumb.

"I sold 350 copies of 'Snatch' in three days," Moskowitz said, "and I don't see any mad rapists running around here."

The comic books caricature sex, he said, "but they're clean stuff. No leather stockings, or whips."

Police Lieutenant Darrell Hickman refused to allow a Chronicle reporter to examine the seized material, all, or nearly all, of which is openly for sale in Berkeley and San Francisco.

"I don't want to show it to you because I might be put in the position of displaying obscene matter," Hickman said.

Moskowitz was arrested on a warrant signed by Municipal Judge George Brunn following a conference with the District Attorney. 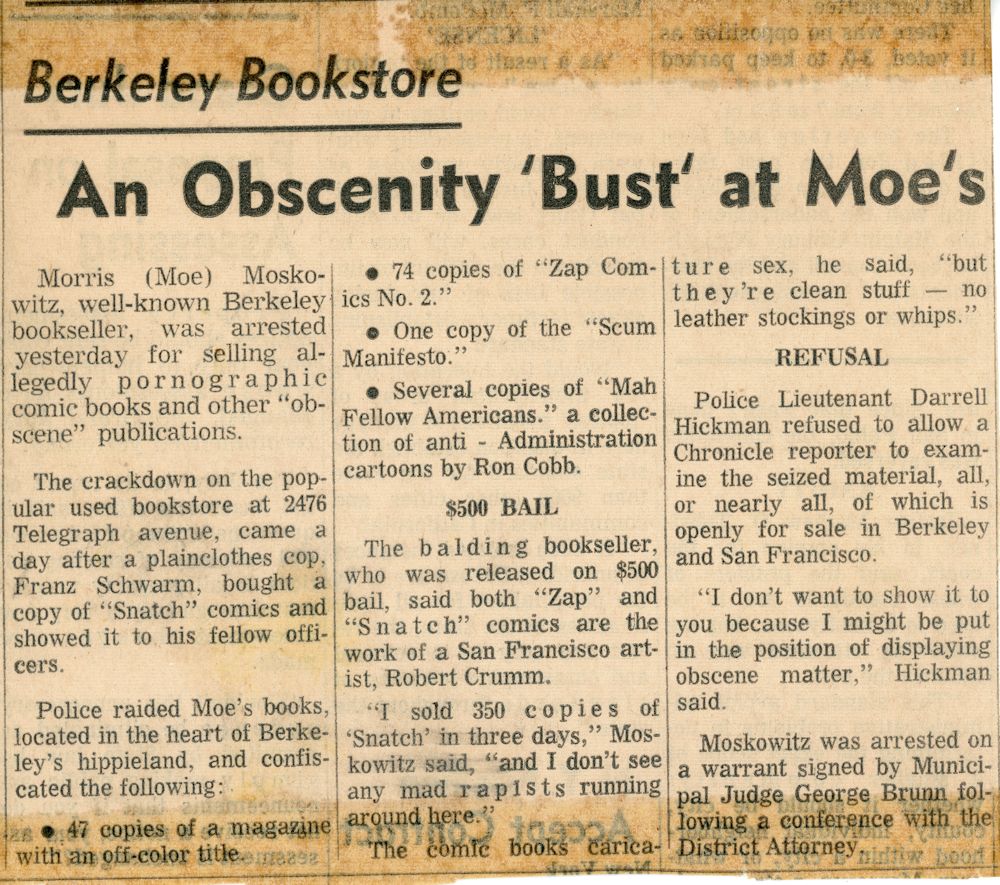 According to police sources, Moe was arrested as a result of a browsing trip through the bookstore by Berkeley Police Officer Franz Schwarm.

Schwarm's browsing led him through the interior of such publications as Zap Comics #2, Horseshit Magazine and the Scum Manifesto, which he considered to be "without redeeming social value."

Schwarm then went to the district attorney's office with a complaint and an arrest warrant was issued by Municipal Court Judge George Brunn. At noon yesterday Moe was arrested in the bookstore and later released on $500 bail.

Although Moe was unavailable for comment last night Micke Romanoff of the bookstore said that the publications involved were "not particularly pornographic" and that they had been generally available in several local bookstores.

Romanoff said that local bookstore owners were banding together to stand behind Moe in this case.

Romanoff also said that police have made no official visits to other bookstores in the area or to such San Francisco bookstores as City Lights Bookstore in San Francisco, where some of the publications involved have been on sale.

Morris (Moe) Moskowitz, the cigar smoking, balding owner of Moe's Bookstore, was cited Thursday for violation of 311.2 of the Penal Code. This section makes it illegal to sell, or display for sale, obscene materials.

In his store Friday, Moe commented on the police action. "I an not even sure what the charges are. They wanted to get me because of 'Snatch' magazine. But I sold out and they were disappointed when they couldn't find any copies. So they got me for 'Horseshit'."

Moe said, "All except 'Snatch' have been on the stands for a long time. 'Scum Manifesto' and 'Zap #2' for three or four months and 'Horseshit' for several years."

Shakespeare's Bookstore still had copies of "Horseshit" on their shelves. The only precaution they took was the move them from the main shelf to a more obscure one.

A number of bookstores on Telegraph Avenue have offered support to Moe. Cody's Bookstore had previously organized the other bookstores to fight a ban on certain books by the Richmond Public Library. A spokesman for Shakespeare's said the merchants "were just waiting to see what the charges are" before acting.

Moe said he hoped to get the support of the American Civil Liberties Union to fight the case.

Arraignment was scheduled for Friday afternoon at 2 p.m.

While Moe waits the outcome of his trial there was growing interest in the magazines in question.

Friday a number of people asked for them of at least gave support to Moe. Said one customer, "Moe is a fine upstanding businessman. He deserves our support."